The Itty Bitty Shasta is being worked on right now! 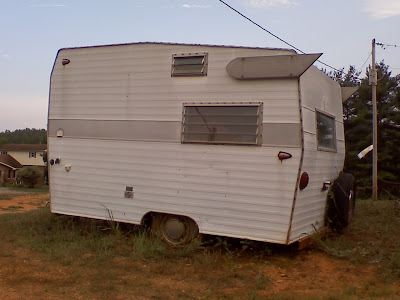 I decided to fix up a 1967 Shasta Camper that mom and dad had gotton from my grandpaw. I remember going camping in it when I was little and it had not been used or touched in about 25 years. As you can imagine it was a little stinky and a little damp! I started tearing out and thought this is a hopeless case. But I moved foreward thinking it would all work out...so far it..HAS!!! 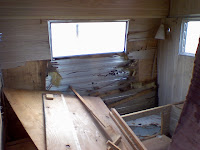 Since my dad is not able to work on it and I thought the initial rebuilding of the walls was a little more than I could handle we pulled it over to a local carpenter just to get the walls, "studs" in place and the new paneling up. Being the handy dandy person I am I want to tackle the replacing of the windows and rebuilding of the bed/couch.

I will have pictures of the condition it was in before as soon as I can figure out where to put them on this bloggy thing.
Posted by Gretchen at 11:47 AM